Ihlara Valley is a 14-kilometer-long (8.7 miles) valley located in Aksaray's rural town of Güzelyurt. With more than half a million tourists, this spot was ranked the 6th most-visited ancient place in Turkey in 2019.

Ihlara Valley holds great historical significance in the history of Christianity. The earliest residents of the valley were the early period Christians looking for refuge from the violent prosecution of the Romans. Over the years, Ihlara Valley grew into a vast town with 80,000 residents and 4,000 dwellings at its golden age.

There are 105 rock-hewn churches and about 10,000 rock-cut structures carved inside the walls of the valley. Among the churches, only 14 of them are open for visitors. The rest are marked unsafe to visit due to boulders falling off the cliff and frequent landslides.

With a population of around 12,000 residents, Güzelyurt is a small suburban settlement in Aksaray.

The town's name, Güzelyurt, translates as "beautiful country" in English. With its numerous historical sites and beautiful landscape, Güzelyurt can be considered the" Mini Cappadocia." Moreover, Güzelyurt boasts a couple of hundred abandoned houses from the Ottoman and Greek eras that can see in every nook and corner of the town.

There are 4 main places to visit in Güzelyurt: Monastery Valley, the Red Church, the High Church, and Gaziemir Underground City.

After Ihlara Valley, Monastery Valley is the second-biggest valley in Cappadocia inhabited by the early Christians. The "Mini Ihlara," as the locals also call it, is a 5-kilometer (3.1 miles) valley where you'll see 28 rock churches, six of which are open to visitors and two underground cities.

Red Church was built in the name of St. Gregory, a 4th-century saint who was one of the founders of Orthodoxy. He spent his last days in a farmhouse in the Güzelyurt Region and was buried there. Back then, the Red Church served as a stop and place of worship for Christian pilgrims. It is one of the oldest churches in the Cappadocia Region.

Although the church was constructed in 1894, the artifacts acquired during excavations in this site show us that this specific spot resided as early as the Bronze Age. Furthermore, many findings dating back to the Hittite period and ancient Romans were recovered in the area. This makes the area where High Church has located one of the oldest continuously inhabited areas of Anatolia.

Although this historical complex was discovered in the 2000s, Gaziemir Undeground City quickly secured its place as one of Turkey's most famous underground settlements. Aside from its residential purpose, the complex served as an underground caravanserai, making this a unique site.

Gaziemir Underground City is located 20 kilometers from the town of Güzelyurt, in the village of Gaziemir. Although it requires you to take a slight detour, this site is undoubtedly a must-see spot.

Aksaray Museum has a vast collection of more than 10,000 artifacts dating back to various eras in history, such as the Iron Age and Hellenistic, Roman, Byzantine and Seljuk eras. Some of the crucial findings you will see at the museum are the skull of the young woman who was the subject of the world's first known brain surgery, tools recovered at Acemhöyük Bronze Age settlement, and items unearthed at the Chalcolithic settlement of Güvercinkayası.

In addition, Aksaray Museum offers a unique exhibition of one of the fantastic mummy collections found in Anatolia. Mummies of people and cats discovered in Ihlara Valley and Çanlı Kilise (Bell Church) are on display at the museum.

Red Minaret Mosque is believed to have been built by Seljuk ruler Sultan Kaykhusraw II (II. Gıyâseddin Keyhüsrev) in the 13th century. This structure, built by using red bricks, is also known as Eğri Minaret Mosque (Slanted Minaret Mosque) because, over the years, the minaret of the mosque has slanted.

This exciting structure from the Muslim Turkish era in Anatolia is commonly known as the "Pisa Tower of Anatolia."

in Aksaray's rural town of Saratlı, the underground 3-story city located. The settlement has 3 water wells, storage rooms, a toilet, cellar, residential units. The necropolis inside the church of the city contains 37 burial rooms. Unfortunately, the church was appallingly damaged because it had been used as a shelter in the previous centuries.

Around 250 AD, during the times in which Christianity was banned, the early Christians sought refuge here in this city and practiced their religion.

St. Mercurius, whose real name was Philopater, was a high-ranked military official in the Roman Army. He had served under Emperor Decius, and soon after, he was appointed a general in the Army due to his extraordinary skills. When Emperor Decius won a war against the Berber people, he wanted to show his gratitude to the Pagan gods by offering them fumigants. St. Mercurius opposed the emperor by saying: "I will pray to no one but my Lord and Savior Jesus Christ."

Due to his disobedience, the emperor got St. Mercurius expelled from the Army. Since he was a very respected general in the Army, he banished St. Mercurius to Cappadocia instead of killing him. Subsequently, to take revenge, Emperor Decius sent his man to the area where the underground city is located today and got St. Mercurius executed by decapitation.

Located 5 minutes away by car from the St. Mercurius Underground City, Saratli Kirkgoz Underground City was also a shelter for the early Christians who were running away from the prosecutions of the Romans.

Sarli Kirkgoz Underground City has 7 floors, but only the top 3 ones are open for visitors. There 40 rooms in total that you can see, which were used as residential units, toilets, and food storage rooms by the ancient Greek residents.

This settlement was a very self-sufficient complex. Sometimes, the city residents could not go out for months, so they built the town considering the possible vital needs they might have in the long run. As a result, the underground city had its bakery, a water well, and an advanced ventilation system which consistently provided fresh air to the units in the city.

Sultanhan is a 13th-century caravanserai that was built in 1229 by the Seljuk Sultan, Kayqubad I. It is the largest of the caravanserais in Turkey. According to the inscription recovered, the architect of this medieval caravanserai is Muhammad ibn Khalwan of Damascus.

The structure consists of open and closed sections, which are used periodically during summers and winters.

The 13-meter-high gate of the caravanserai is one of the most significant parts of Sultanhan. Ornamented with wonderful artisanal carvings, Islamic decorations, and characteristic Seljuk patterns, its remarkable state of preservation marvels the visitors.

The rooms and sections of Sultanhan, which can visit today, were used as a kitchen, dining hall, bathhouse, lounge, and chambers where travelers spend the night.

Another notable spot in Sultanhan is the square-shaped stonemasonry masjid found erect at the center of the open-air hall. The caravanserai's main gate followed them known by the name of köşk masjid; the guests of Sultanhan used this Islamic worship complex in the past centuries.

Aşıklı Höyük is the oldest known settlement in the Cappadocia region. Situated alongside the Melendiz Stream, which also flows through Ihlara Valley, Aşıklı Höyük was a historically significant agricultural community.

This prehistoric village is of great importance in terms of medical history as well. Archaeological studies in the area discovered that the first brain surgery in the past was performed in Aşıklı Höyük. The skull of the patient, a young woman, can be seen today at Aksaray Museum.

The bases and walls of the 10,000-year-old structures have some remaining plaster with paintings on them, which can see inside the main excavation area.

Outside the central Anatolian province of Aksaray, the stunningly beautiful, ancient Çanlı Kilise (translated as the Bell Church in Turkish) church complex and accompanying rock dwellings.

The Bell Church is an 11th-century religious complex built in traditional Byzantine style. Today, it stands in the region of Western Cappadocia as one of the finest and the most well-preserved examples of orthodox Byzantine masonry churches. In the 1990s, discovered bracelets, earrings, necklaces, rings, inscriptions, and mummies were found during the excavations that were conducted at the church.

The church has several tombs. A room on the backside (to the north) of Bell Church has a few graves and arcosolium (arched recesses used as a place of interment). In addition, the room right across the entrance of Bell Church serves as a small cemetery with a collection of tombstones present.

The ancient city of Mokissos is located in Aksaray's rural town of Helvadere, situated right at the northern foothill of the dormant volcano, Mount Hasan.

There are approximately 1,000 dwellings in the city. In addition to these residential units, numerous other structures once served as churches, state buildings, wells, and more.

Mokissos was the capital city of the Byzantine state Cappadocia III and a very significant religious and political hub during the era of Byzantine Emperor Justinian I. Furthermore, this ancient city was the archiepiscopate of the vast region covering the south of Kızılırmak River (known as Halys in Ancient Greece).

The ancient city of Mokissos was first mentioned in history by Byzantine historian Procopius in the 550s. The way this famous scholar talked about this city helps us understand the past:

"There was a very dilapidated castle on a plain in Cappadocia named Mokissos. The emperor Justinian I had it demolished and built strong fortifications on the steep lands west of the castle. He also built many churches, bathhouses, and other structures to reflect the luxury of the city. Subsequently, Mokissos became a metropolis, and the Romans started calling it the most important city of this large area."

Mokissos's opulence and fame did not last long. This short-lived ancient city was deserted in the eighth century, just two centuries after its foundation. Mysteriously, the reason behind its abandonment is not known for sure.

5 Top-Rated Hikes and Walks in Turkey 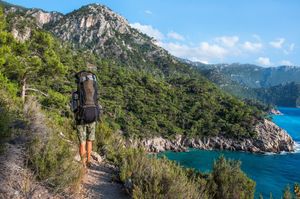