Istanbul is a city that has enchanted its visitors for centuries. Here, culture and history come together in a fascinating mix of east and west. Whether you’re visiting for business or pleasure, you’ll soon see why this magnificent city enthralled ancient emperors as much as it does modern tourists.

You’ll want to be prepared while you’re there. They don’t mind bartering in Istanbul, especially if you stop in one of Istanbul’s famous bazaars. For that, you’ll want to have plenty of Lira in your pocket to bargain with - which means you are going to need some cash.

Use this guide to avoid the rip-offs and find the best places to exchange your cash while you stay in Istanbul.

Things to know before exchanging currency

Comparing fees from one service to another may seem fairly straightforward, but getting the best deal when you’re looking to convert your money isn’t quite so simple.

Here are four things to look out for when you exchange your money in Istanbul:

It’s best to avoid switching your unwanted cash back to your home currency - it means you’ll have to pay fees and charges twice. So make a plan to use up all the money you exchange - spending the last of your cash in one of Istanbul’s atmospheric bazaars shouldn’t be a chore.

Where to exchange money

Changing cash isn’t going to be a problem in Istanbul - but finding the best lira rates might be more of a challenge. Be wary of hidden charges and fees, which you can spot by calculating the amount of lira you’ll receive after conversion and comparing this figure amongst your options.

Some options are listed below so you can review their exchange rates before choosing - but you can also simply visit one of the tourist districts and check out the offered rates against your currency converter for the fairest deal.

Ataturk Airport in Istanbul is home to several different exchange services. Unusually for airports, different companies operate under one roof so shop around. Usually the airport won’t offer the best deals, though - so know your mid-market rates in advance.

According to flight schedules - call ahead if you have any questions.

An exchange bureau in the Beşiktaş neighbourhood

Call or email ahead for hours.

Para Çevirici has an office in the Kadıköy area of Istanbul.

Call or email ahead for hours.

Alternatively - save the hassle and get an even better deal by using Transferwise. If you or a friend has a Turkish Lira bank account, you can transfer money between accounts using the real mid-market exchange rate. No need to negotiate the currency exchange offices - instead use that time to enjoy all Istanbul has to offer. 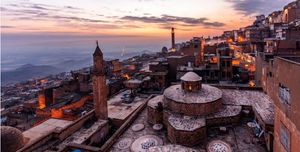