The Çanakkale Guide: Retirement, Cost of Living and Lifestyle

Laying on the southern coast of the Dardanelles Strait in Turkey’s northwest, Çanakkale is a city that straddles two continents – Europe and Asia – much like Istanbul.

Although it is mostly known for being the battleground of many course-changing wars and having a history that spans 4,000 years, the seaport city also mesmerizes its beautiful bays and blue seas.

It is more tranquil than many cities along Turkey’s coasts, but it also houses an esteemed university, which offsets this calm and brings life to its streets.

Is Çanakkale the right fit for you? Let’s see.

Çanakkale is one of the most popular destinations of retirement in Turkey and presents a quiet, authentic experience for those who have had enough city life. The city center comprises mainly of ex-Istanbulites and other Turkish retirees, with areas such as Assos being favored by foreigners.

If you were to compare Çanakkale to Antalya or Bodrum, for example, you’d see that life is more affordable and slower along the Dardanelles, especially in winter.

When it comes to the weather, Çanakkale attracts more rainfall than the south, and most of the year can be gusty, which is why you can see many wind turbines scattered across the city’s hills.

Summers are hot, but there is always a breeze to help you cope. The summer season is relatively short, especially when Turkey’s south and the winters are crisp. It rarely snows, and if it does, it doesn’t stay for long on the ground.

Most restaurants, bars, and cafes are located along a waterside promenade dubbed the Kordon, and during summer, these places are heaving.

The city’s population can be divided into two distinct groups: retirees and young students. Surprisingly, there is an odd harmony between both groups.

Like Izmir, due to its historical role in World War I, the people of Çanakkale are quite patriotic, as evident from the streets swarmed by thousands waving Turkish flags and singing songs on national holidays.

Traffic could be considered non-existent if used to big city jams, except for week-long national holidays.

Cost of Living in Çanakkale

On average, renting in Çanakkale is more than half as cheap as in Istanbul. A 1-person apartment can cost as low as TL 700 outside of the city center, and for a couple hundred more, you can upgrade to a 3-bedroom flat. Even right in the city center, you can find places to rent for under TL 2,000. However, if you are a student and want to find accommodation closer to the campus, you may see that rent prices are hugely inflated.

The average cost of living is around or slightly higher than the national minimum wage (~ $380), mainly depending on your rent.

Public transportation is affordable, with a single fare costing around TL 3.50 and a monthly pass about TL 120.

Çanakkale attracts many tourists with its mythological sites that witnessed events such as the Trojan War. (Not to mention that the famed wooden horse used in the movie “Troy”, starring Brad Pitt and Orlando Bloom, was gifted to this city.) The ancient Greek city of Assos is also the place where philosophy flourished.

Your mind and heart are sure to connect with history when you see the words “Traveler halt. The soil you tread, once witnessed the end of an era,” etched on the side of Çanakkale’s hills, about the Gallipoli Campaign.

Born from Turkey’s famed Iznik ceramics from the Ottoman era, Çanakkale’s clay and ceramic products have seen burgeoning interest. In recent years, workshops for such traditional arts and crafts have also gained traction. The city also produces an array of carpets, rugs, iron, and copper products that showcase the authentic local culture and make great gifts.

Çanakkale sits on a perfect crossroads between the Aegean and the Marmara Sea. The city is close enough to Istanbul, Izmir, and Greek islands, making it relatively central. You can reach these destinations in 3 hours or less. When you have had enough of the mainland, you can also hop on a ferry to Gökçeada, Bozcaada, or Cunda Island for a change of scenery.

Çanakkale and its residents care a lot about organic produce and sustainable living. It is not surprising to see many houses with fruit trees in their gardens and village women creating natural soaps with fruit and milk extracts. The city is also famed for its kaymak (cream) and ezine cheese made from cow’s or sheep’s milk.

Çanakkale may be known for its winds, but it also the lands where green greets blue. From the blue-flagged beaches of Ayvacık, Biga, Gökçeada, and Gelibolu to the oxygen-rich Mount Ida with pine trees, waterfalls, and peaceful streams, the city is perfect for nature lovers.

5 Things I Wish I’d Known before Moving to Çanakkale

Especially when compared to a bustling metropolis like Istanbul, you may feel as if you have run out of places to go to and events to attend. Despite being a college town, it is still a small city, and if you tried, you could visit most places in one day. If you want to be discovering new sites every day, it may not be the right fit for you.

Not having an established social circle or friends and family here may be isolating for some, especially in winter when the number of social activities diminishes.

The local culture is also very tightly knit, and besides students, not many people know English, so if you plan on moving here, it is best you learn a bit of Turkish.

If you are expecting soul-warming waters like the Mediterranean or southern Aegean well into fall, you might want to reconsider. At 17-23 degrees Celsius at most, the seas of Çanakkale are suitable for a refreshing swim to wake you up rather than floating in mellowing waters.

You’ll suffer wind-chapped skin and lips like no other if you don’t take precautions. The city sees gusts that can blow you off your feet year-round, and for those unacquainted, you might be left to deal with headaches. Coupled with the wind, you will also likely feel like you have pins and needles on your face when it rains.

Despite being famous for its rainy season (though nothing like Europe), unfortunately, the city’s infrastructure still needs work. With heavy and sudden rainfall, certain areas can be susceptible to flooding. 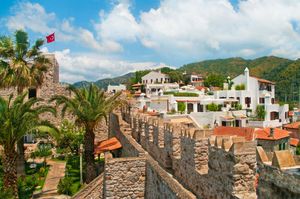 The Marmaris Guide: Retirement, Cost of Living and Lifestyle

The Izmir Guide: Retirement, Cost of Living and Lifestyle 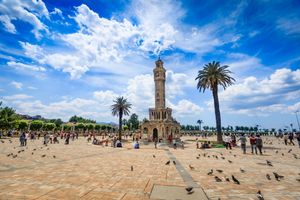