The Best Turkish Snack Foods You Have to Try

When one thinks of snacks in Turkish cuisine, meze, which is the equivalent of Spanish tapas, is what first comes to mind for many.

Served appetizers or starters, both hot and cold, mezes are a staple at almost every restaurant. However, many other snacky dishes in Turkey are sold by street vendors, markets, or restaurants.

Here is our selection of the 10 best and unique Turkish snacks:

If you like mussels fried or marinated in sauce, you should give this one a try. The name dolma refers to them being stuffed, which in this case is peppery, spicy rice. With a healthy squeeze of lemon, especially after a night out, eating dozens of this delicious snack is not uncommon.

Fried " cigarette " rolls are the easiest way to describe these as faithful to the name as possible is fried "cigarette" rolls. Made from sheets of yufka (phyllo pastry) and stuffed with either Turkish feta cheese (beyaz peynir) or çökelek and parsley, these pastries are then fried in oil and served as a midday snack.

If you like sigara börek, you should also try paçanga böreği, which are triangle-shaped and stuffed with kaşar or similar cheese, and slices of pastırma, aka Turkish pastrami.

In seaside towns, you will see street sellers walking up and down the beaches with buckets of boiled corn on the cob called "süt mısır." The name comes from the fact that they are boiled in water, milk, butter, and sugar. In cities, you will see the grilled kind more often, sold by vendors in carts. You can also find sweetcorn in cups if eating on the cob is too messy for you. You can eat them plain, creamed, or with pepper.

Leblebi is roast chickpeas. This street food can be consumed plain or seasoned with salt, hot spices, or dried cloves. They can even be coated in sugar or chocolate. You can have them fresh on the street or buy them pre-packaged from your nearest supermarket. Leblebi is also a popular snack in other countries such as Syria, Iran, and Afghanistan.

Turks love eating shelled sunflower seeds. It wouldn't be wrong to say that these are their number 1 go-to snack, especially for football matches. They can be plain or come coated in a layer of salt. Don't eat too much at once if you're buying them salted, as your lips may go a bit numb from the salt after a while.

The art of cracking open a seed with your teeth in one go is also a skill you will have to master in time.

Sold by street vendors or bakeries, simits are some way between bagels and pretzels. They are coated in a generous layer of molasses and sesame seeds and twisted to perfection. Plus, if you live in Istanbul and have to take the ferry to work every day, you can share this snack with fellow seagulls. There are also kinds of simits coated in sunflower seeds. Açma, simit's sister, is a softer kind and more accurate to a bagel. Instead of sesame seeds, you will often see them topped with black cumin seeds.

It can best be described as a loaded baked potato. Kumpir's base is a big baked potato cut open and filled with butter and cheese. You then get to choose all your preferred fillings – corn, sausage pieces, pickled red cabbage, gherkins, mayonnaise-based salads, haydari, jalapenos, grilled peppers, olives, and so much more. If you wish, you can also add ketchup or mayonnaise on top, though that is not the traditional preference.

Gözleme is a Turkish delicacy similar to börek. It is a savory flatbread stuffed with meat, various cheeses, and vegetables. The most popular stuffings include minced beef and onion, potato and spices, and spinach and cheese. The dough is generously brushed with olive oil, and sometimes a little bit of yogurt is added, all of which prevent it from going too brittle. It is baked on a special griddle called "sac." Although it is consumed widely as an afternoon or pre-dinner snack, it has become a popular breakfast food in recent years.

Although the name is scary at first (literally raw meatballs), the kind sold on the streets does not contain meat. It is a spicy dish made from fine bulghur, onions, tomato and pepper paste, and many spices. The traditional kind includes raw beef, which is treated and "cooked" from the heat generated from the constant kneading and hot spices.

Çiğ köfte can be sold in 100 to 1000 gram packages, served with pomegranate molasses, lemon, and lettuce leaves. However, nowadays, the most popular way to consume it is as a dürüm, wrapped in a lavaş or sheet of yufka and stuffed with various greens and onions.

Often referred to as sweet Turkish churros, halka tatlısı is popular street food and traditional dessert in Turkey. The name, when translated, means circular dessert, which gets it from its shape. However, some people may refer to this colloquially as "kerhane tatlısı," which implies brothel dessert. People say this comes from when street vendors used to sell this dessert in front of these establishments. People from Eskişehir also call this dessert ballı ballı (honey honey).

Although churros and halka tatlısı are fried dough, the Turkish one is drenched in a super sweet syrup and contains semolina. It is prepared in the same way as tulumba, another well-loved Turkish dessert, though these are fried as smaller oblong pieces.

The 10 Best Museums in Turkey 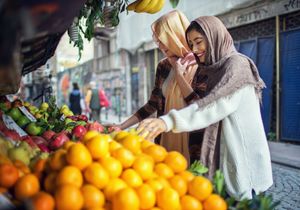