Aphrodisias is one of the most well-preserved ancient cities in Turkey, located in Western Turkey, in Aydın.

The oldest artifacts unearthed in Aphrodisias show that the earliest human activity in the area dates back to 5000 BC. The ancient Greeks settled in the lush valley, cut by the Dandalaz River, upon which Aphrodisias built in the 6th century B.C.

By the 2nd century B.C., when the city had received the name of Aphrodisias, it was one of the most important cities in the Carian Province of the Roman Empire.

Besides its marvelously intact ruins and massive size, Aphrodisias also boasts one of the most well-preserved stadiums of the ancient Greek world, with a seating capacity of 30,000.

It became the center for the cult of Aphrodite, for whose worship the Temple of Aphrodite constructed. A magnificent sculpture of Aphrodite stood within this temple sanctuary that attracted people from all over Ancient Greece.

You’ll also find Aphrodisias has an abundance of meticulously carved artisanal sculptures produced in the Sculpture School within the ancient city. The art of sculpture was very advanced in Aphrodisias due to the marble reserves around the city. These reserves allowed the city to be relatively wealthy, reflected in all the monuments, sculptures, and other works that are still gloriously standing. Most of these date back as early as the 1st century B.C., defying the centuries and disruptive natural elements.

Before commencing your visit, I highly recommend you to stop by the Aphrodisias Museum, located inside the ancient city, which has one of the most impressive artifacts unearthed during the excavations of Aphrodisias.

Compared to other heritage sites on this list, Aphrodisias is relatively undiscovered among tourists. Yet, in times as these during which the COVID-19 pandemic limits socialization, you can benefit from the unpopularity of this site and safely visit it.

The Ancient City of Ani situated in the easternmost Turkish city of Kars, adjacent to the Turkish-Armenian border.

Rising to prominence around the 5th century A.D., Ani served as the capital of Medieval Armenia for centuries, starting with the Armenian Kamsarakan Dynasty. At its peak, Ani had a population as high as 100,000 and was one of the main hubs for trade and art in Anatolia, controlling over a branch of the Silk Road.

Starting with the Armenians, followed by the Byzantines, then the Safavids, and later the Ottomans, many ancestors of Anatolia ruled Ani, which resulted in Ani’s characteristic amalgamation of cultures, languages, and religions.

When visiting Ani, you’ll immediately be confronted by the long-stretching city wall. Walking around the vast highland Ani is located on can take a few hours, and you’ll be surrounded by breathtaking nature throughout, as well as views of Armenia across the river that borders the city.

Kayaköy takes us to the warm shores of the Mediterranean town of Fethiye.

Kayaköy was a wealthy Ottoman village that had primarily been resided in by the Greeks. The town had its golden age between the 18th and 20th centuries. However, with the population leaving for Greece due to the Population Exchange Agreement signed between the Greek and Turkish states in 1923, the settlement turned into a ghost town, the ruins of which can be visited today.

In the last decade, with the rising popularity of the Blue Lagoon in Oludeniz, Kayaköy became among the most known symbols of the region. Each day the popularity of this ghost town grows as tourists flock to Kayaköy.

Çatalhöyük was a relatively large Neolithic and Chalcolithic settlement considered one of the oldest in human history, dating back to over 9400 years ago. It is also considered by many to be the oldest village or town discovered—the town of Çumra, in Konya.

Excavations conducted in Çatalhöyük shed light on the social and economic life in pre-historic ages. These excavations revealed no streets in Çatalhöyük, and dwellings built closely abutting each other, many times on top of one another like a honeycomb. They typically buried the dead under the floor of these houses and kept the rooms relatively clean, which was interesting to archeologists who found no evidence of littering. Up to 8000 occupied this huge town at its peak, and it remains a remarkably well-preserved site to see today.

Located in the province of Çorum in Central Anatolia, Hattuşa (often called the Boğazköy Archeological Site) was the capital city of the Hittite Empire. Hattusa is primarily known for its advanced city planning, beautifully carved ornaments on the Royal Gate, the Lion Gate, and the two sphinxes on the Sphinx Gate, which are now found at Boğazköy Museum nearby. Also not to be missed is the open-air museum of Yazılıkaya with well-preserved rock art.

The tourism organization in Hattusa is modern and visitor-friendly, allowing you to see all the spots in this vastly spread city by driving along an asphalted road that covers every nook and corner.

Hattuşa makes for a perfect day trip. The city is located 200 km away from Ankara and takes approximately 2 hours 20 minutes (one way) to drive to.

You can visit Hattuşa from 10 am to 7 pm in the summers and from 8 am to 5 pm in winters. The entrance is 10₺ per person.

Termessos is a mountain-top ancient city built 1,000 meters (3,280 feet) above sea level. Today, it is part of Mount Güllük-Termessos National Park. Concealed by a dense forest and steep mountains, Termessos had always been protected from invasions, sieges, and other human threats; its unique location served the city well as a natural shield throughout the centuries.

Currently included on UNESCO’s Tentative Sites List, Termessos is one of the most well-preserved and breathtaking sites in Turkey’s southern Antalya province.

Termessos is primarily known as the city that could not be conquered by the Macedonian emperor and warlord, Alexander the Great. Unfortunately, aside from the journals kept during Alexander the Great’s military campaign in Asia Minor and a few surviving records from the Roman Empire era, few documents could illuminate the history of Termessos. It is still unknown when and by whom Termessos found.

The city was first mentioned in history during Alexander the Great’s siege. Here are a few known facts about the city: 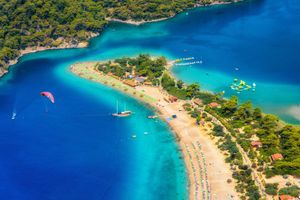 The 10 Best Beaches in Turkey

Bringing Your Pet Dog or Cat to Turkey: All You Need to Know